Our people are our biggest assets. When it comes to your yearly tax or any of your other financial needs, you’ll benefit from a strong knowledge base and professional expertise — as well as the depth of real-life experience.

Our people are our biggest assets. When it comes to your yearly tax or any of your other financial needs, you’ll benefit from a strong knowledge base and professional expertise — as well as the depth of real-life experience. 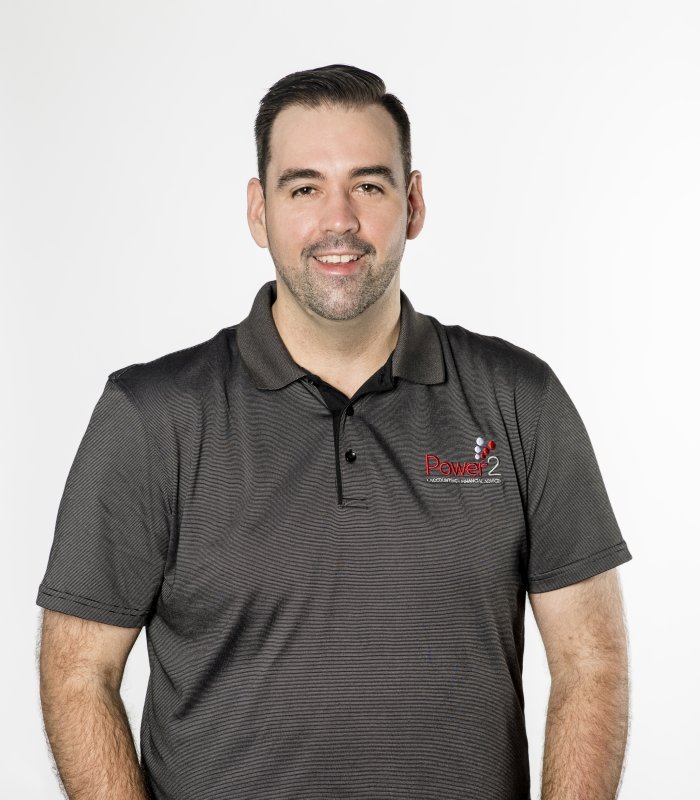 Daniel has been in the accounting industry since 2001. He first started as a Tax Consultant at a local practice based in Mackay, Queensland. He earned a graduate accounting role within the first year after finishing his studies at Central Queensland University in Mackay. Daniel quickly moved up the ranks and became a Senior Accountant in just three short years. He managed the workflow and billing for a team of 6 tax consultants until the firm was sold in 2010.

Daniel joined the Power2 team in 2010. He continued as the Power2 Senior Accountant for the next two years before joining the group as owner when expanding its practices to Brisbane. Daniel manages the day-to-day operations of the firm and looks after the affairs of business clients. These jobs range from accounting and tax compliance to finance applications, budgeting and business planning.

Daniel holds a Bachelor in Accounting, a Diploma of Financial Planning, a Certificate IV of Mortgage Broking and Finance. He is also a Justice of the Practice (Qualified), a registered tax agent and a Fellow of the Institute of Public Accountants where he holds the Public Practice certificate.

Daniel has an incredible wealth of knowledge and experience but never pretends to know everything. This quality is quite refreshing in an era that seems peppered by unduly confident, inexperienced personnel who over-promise and under-deliver.

Having come from a family of small business people who work and have worked across various trades and professions (Refrigeration, Air-Conditioning, Electrical & Carpentry), Daniel has earned an extra edge in understanding the mindset of self-employed business owners. He has personally bought, merged, expanded and systemized four businesses within the duration of his career so far.

Daniel is a bit of a tech guru and can assist with the setup and training of most applications available to business owners (i.e Xero, MYOB, QBO, Dext). He also loves a good whisky and playing a few rounds of Fortnite on the Xbox/PC with the kids.

When Daniel is not at home with his family, he regularly helps various car racing teams in the Production Sport and Improved Production categories. Race meetings are often held at Qld Raceway, Lakeside, or Warwick. However, Daniel has also traveled to numerous tracks in NSW and Victoria. He most recently assisted Team 84 (Class C – 3rd Place Winner) as fuel rig operator in the 2021 Bathurst 6 Hour.

Daniel’s wife, Kayte, is a registered nurse, and they have two energetic children. Saturdays are typically spent traveling to and from footy matches (Go Yatala Rams!!!) and attending roller skating practices. 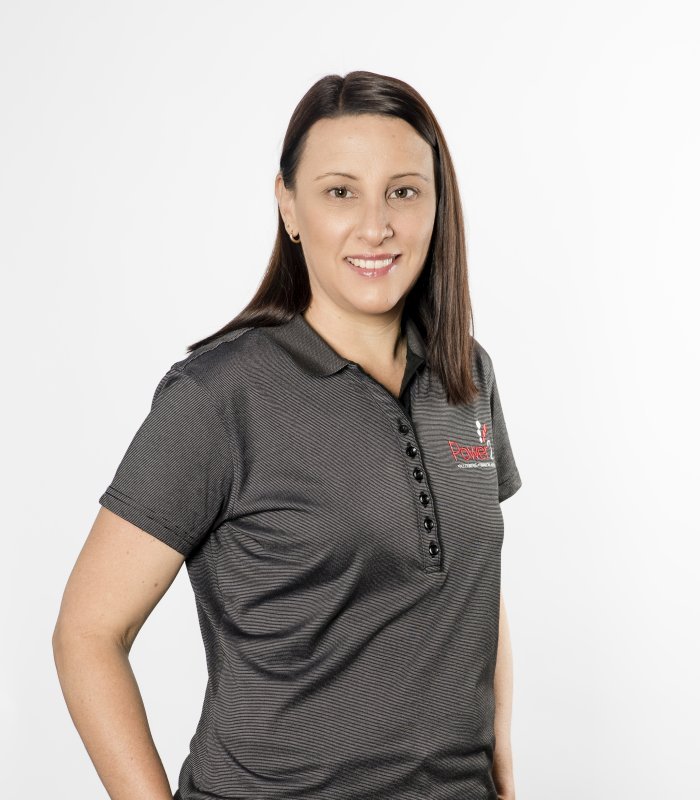 Sarah has been in the financial planning industry for more than 25 years. She started as a trainee in Mackay, working for a boutique financial planning firm that specialised in high net wealth clients and self-managed superannuation funds. Before joining our team in 2014, Sarah spent three years as Senior Adviser for large dealer groups in Melbourne.

At Power2, Sarah heads up the self-managed superannuation and advisory divisions, including insurance, investments and financial planning. Sarah became a partner in our firm in early 2016.

Sarah is a CERTIFIED FINANCIAL PLANNER® and a professional member of the Financial Planning Association of Australia. She is registered with the Tax Practitioners Board as a Tax (Financial) Adviser No. 24792478. Her formal qualifications include a Bachelor of Business (Accounting) and a Diploma of Financial Planning. She has specialist accreditations in Self-Managed Superannuation Funds, Margin Lending and ASX/Listed Securities. Sarah is also a Justice of the Peace (Qual).

Sarah has the best of both worlds: a great career helping people to meet their financial goals and a wonderful family. However, she couldn’t do it all without the help of her husband who is a stay-at-home dad to their two boys. 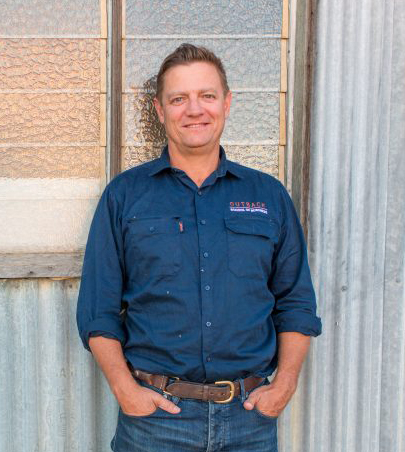 Occasionally you come across someone who is so obviously well suited to their occupation or field of interest on many levels. These people exude confidence and comfortability in fulfilling the role they undertake on a daily basis. Jonathan Thurston comes to mind, alongside Quentin Bryce, Nick Riewoldt, Richie McCaw and David Attenborough. These people are the ‘tough guys’: the researchers, mentors, community leaders, charismatic figureheads and inspirational winners.

Andrew will tell you that he’s not necessarily one of those guys, but he does share some of their qualities. It has taken 27 years in the workforce, including some 15 years spent self-employed, for him to realise his core commercial strength in business planning and execution. Albeit, he’s never been an elite athlete, discovered anything newsworthy, or inspired a generation. Still, he’s anything but a plodder and has built a stand-up career covering professional services, international manufacturing, heavy industry and agriculture.

This astute business advisor has a Business Degree, an MBA, and is a Certified Practicing Accountant. Perhaps most importantly, Andrew understands the ins and outs of running a  business. He recognises that — in order to kick goals and score wins — you have to be prepared to push through the challenges. Furthermore, he appreciates that some business operators need to be coached about their purpose, their motivation, and their strategy.

Andrew is a problem solver who gets to the heart of issues very quickly, and he’s not afraid of asking the difficult questions in order to achieve this. His direct and insightful approach is centred around challenging you and your business to create improved focus and more rewarding outcomes. 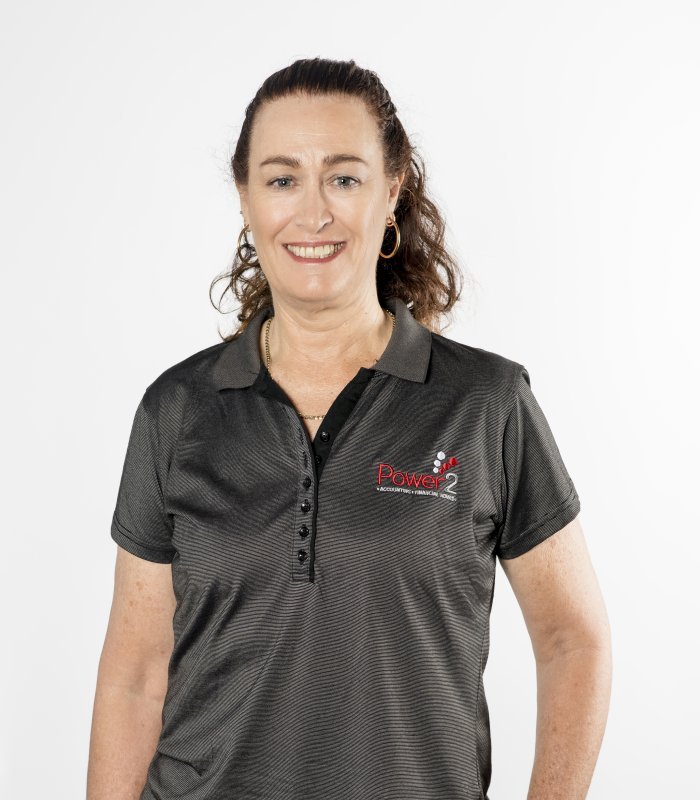 Sue is currently Power2’s longest-serving employee. She joined our firm in 2012, following the merger with Holzworth Law & Associates. She has over 30 years of taxation experience and is well-versed in all accounting areas, including tax return preparation and business activity statements.

Sue has a three-day work week (Monday, Wednesday, and Friday). If you’re looking for her on a Tuesday or a Thursday, she’ll be on the golf course. 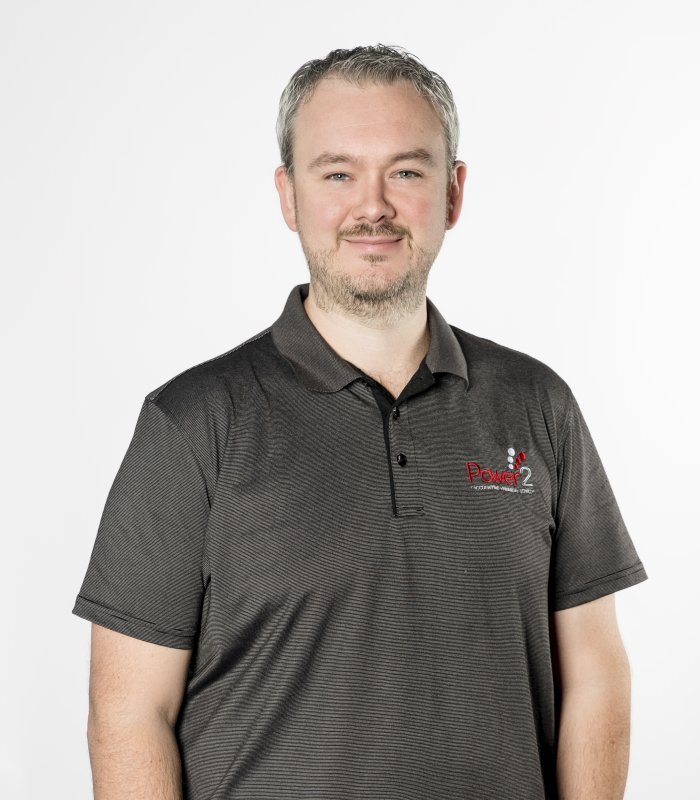 Gary completed a Bachelor of Commerce with Griffith University with a major in accounting. In 2007 he started specialising in taxation.  He has gone on to complete the CPA Australia program and is also a member of the Institute of Public Accountants.

For our clients, Gary manages the taxation and business affairs of individuals and small business clients across the full spectrum of occupations and business industries. He can translate complex matters into everyday language and is an excellent researcher of tax, business structuring and asset protection strategies.

Gary enjoys helping those new to business get started and set up. His patience and understanding are invaluable to those needing guidance early in their business journey.

Gary is a family man and enjoys spending as much time as possible with his two beautiful children. 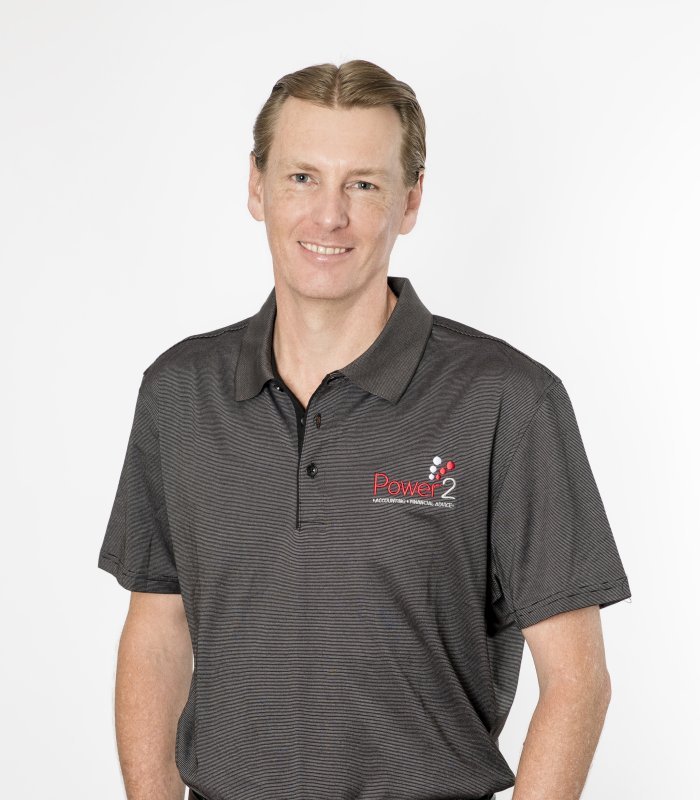 Stuart has close to 27 years of experience in the accounting and taxation industries. He earned a Bachelor of Business with a major in Accounting from the University of Southern Queensland after beginning his career with Income Tax Professionals (ITP).

During his nine years with ITP, Stuart spent most of his time managing the Ipswich office, though he also worked in several other locations (and taught the ITP tax training course in his last year at the Browns Plains office).

Stuart was born in England and moved to Australia when he was 14 years old. He returned to England in 2003 and spent the year getting to know his younger half-siblings. Stuart returned to Australia and began working for a boutique firm in Brisbane City.

After working for this boutique firm for seven and a half years, Stuart joined Strategies 4 U in 2011 (also having relocated from Ipswich to Caboolture). He stayed with Power2 throughout the merger, marking his tenth year with the company.

Stuart works with a diverse range of clients, including individuals, partnerships, small business owners, as well as corporations and trusts. His role includes managing all tax-related issues and lodgements. Stuart is also well-versed in assisting clients who have their own self-managed superannuation funds.

Stuart prefers to spend his free time outside in the garden, getting some fresh air and pottering around. To keep his mind active, he enjoys reading and jigsaw puzzles. He used to compete in archery as well but happily gave that up when he got married. 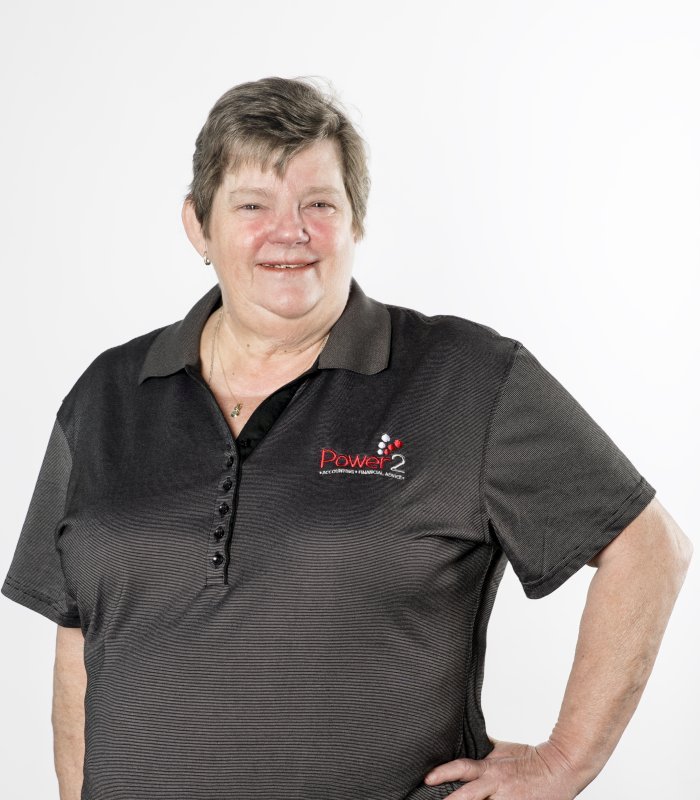 Heather has over 25 years of industry experience, and she prepares the majority of the individual income tax returns at the Slacks Creek office. She joined the Power2 team in 2012, following the merger of Power2 and Holzworth Law & Associates. She previously worked for the principles (since 2001). Before working for Power2, Heather worked at the Income Tax Professionals (ITP).

Heather enjoys long drives on the weekends and traveling overseas (when permitted). 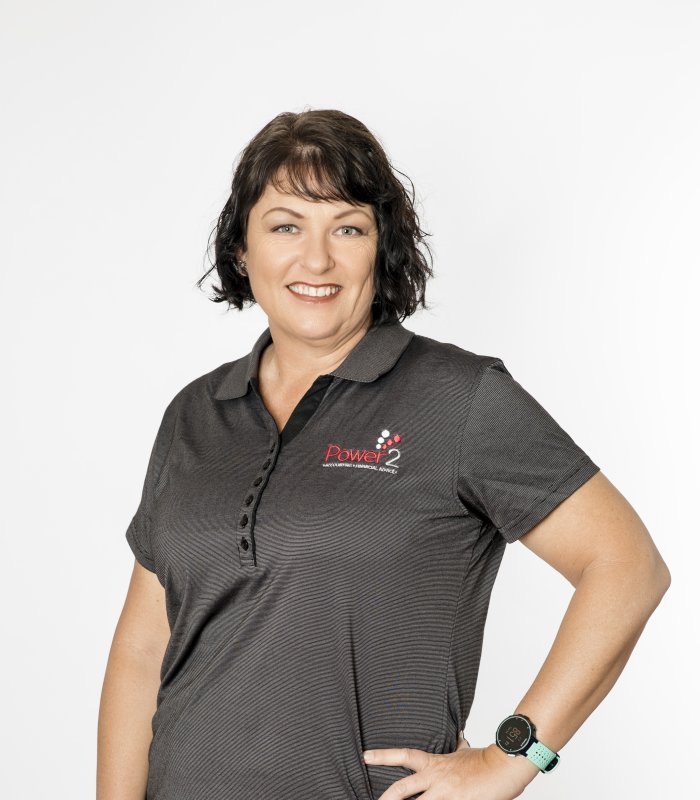 Shelley joined the Power2 team in March 2016 as part of a merger. She had been with a previous firm for over eight years. She has over 19 years of taxation experience and is well-versed in all accounting areas, including the preparation of tax returns, financial statements, and business activity statements for all entity types.

Shelley’s down-to-earth personality enables her to explain complex tax matters to clients while making them feel comfortable with their tax position. She has been an active member of her community for over 20 years, serving on the boards of several different associations.

Shelley is a single mother who has supported her two sons’ successful sporting careers in football and rodeo. In her spare time, she enjoys travel, obstacle races, crafting, and a quiet rum. 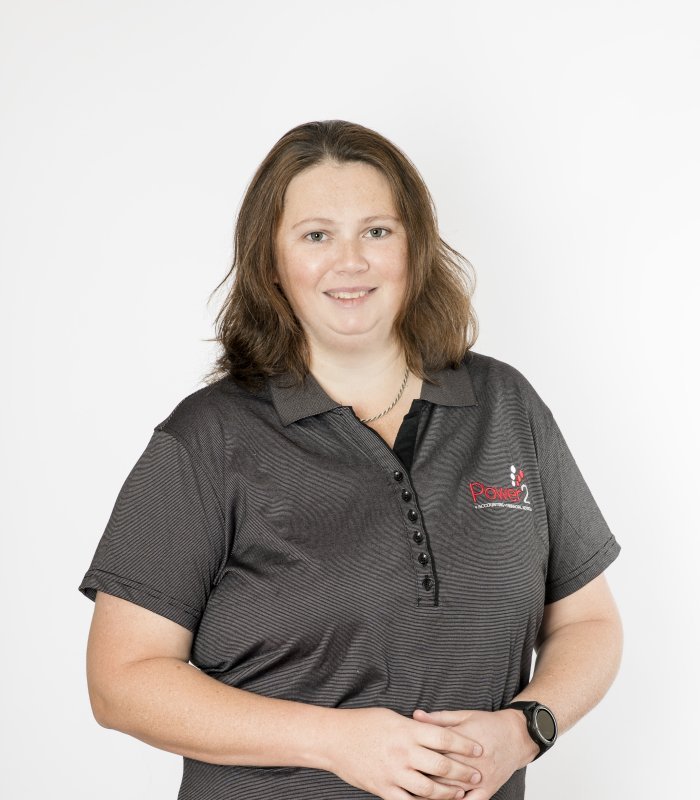 Michelle joined our team in March 2016 as part of a merger. She had been with the previous principal for over 8 years. Michelle has a retail management background and enjoyed her previous role as administrative support for various business sectors (finance lending, real estate, financial planning, and accounting).

Before the merger in 2016, she had completed her real estate qualifications and was also in charge of their Caboolture office’s Residential Property Sales Department, as well as assisting the Rental Management Department.

Michelle has returned to the administration team on a full-time basis since the merger. During this time, she has enjoyed establishing rapport with clients and assisting them with a variety of needs. Although she is not a tech guru, she enjoys helping to maintain the client database and streamlining administrative processes whenever possible.

Michelle has two young boys at home who keep her occupied when she is not at work. She now only works four days a week to facilitate the necessary work-life balance of a busy mother (Monday, Tuesday, Thursday & Friday).

Michelle enjoys camping, bush/mountain walks, park runs, and going to her local gym when she is not working. 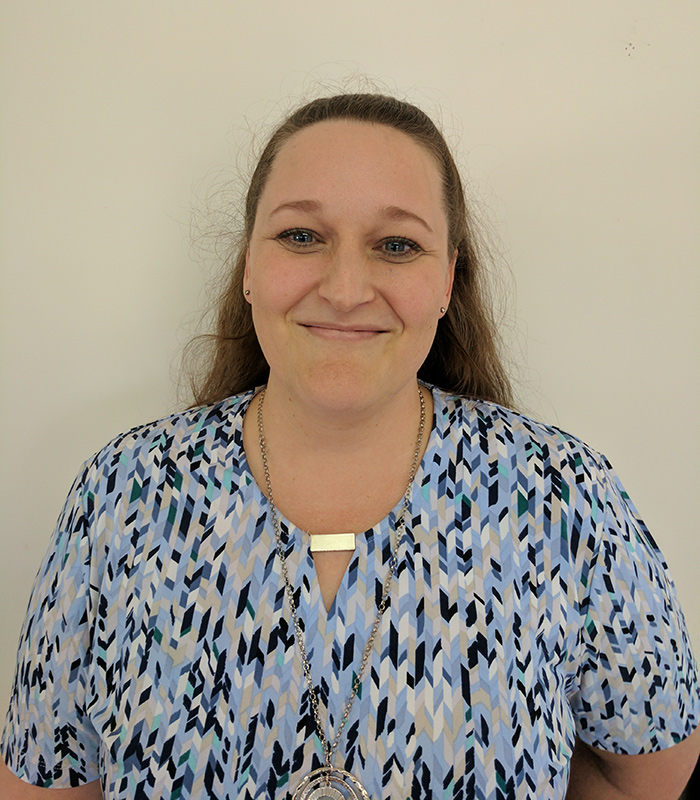 Wanda joined our team in March 2016 as part of a merger. She had been with the previous principal for over 13 years. Wanda has enjoyed working as a member of our administration team in Caboolture. During this time, she has developed a wonderful rapport with our clients and always greets them with a smile.

Wanda always strives to provide excellent customer service and is fantastic at assisting clients with any questions they may have. She has completed a taxation course to help our clients even more.

Wanda spends her weekends with family and her spare time dabbling in photography. 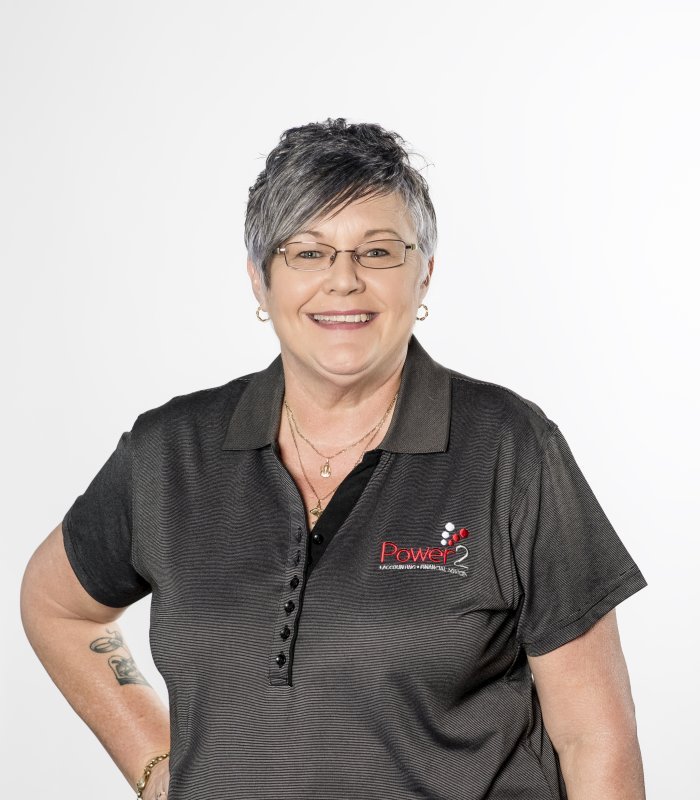 Cheryl has nearly 40 years of experience in the accounting industry. She has been a member of the Power2 team at the Slacks Creek office for the past 11 years.